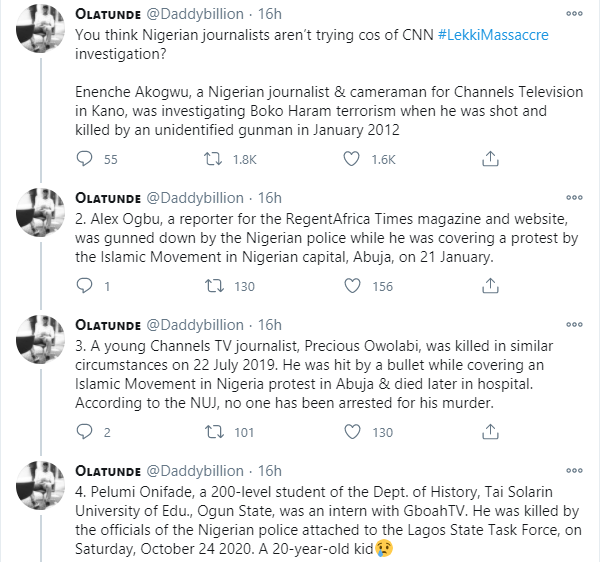 A Nigerian Twitter user has compiled list of journalists that have been killed and others who went through various challenges in Nigeria to counter comments of by some saying that “Nigerian journalists are not trying” following CNN documentary of the Lekki shooting.

Recall that CNN’s documentary which aired yesterday stirred up mixed reactions and also gave more insight into what happened at Lekki Toll Gate.

Reacting to this, @Daddybillion tweeted;

2. Alex Ogbu, a reporter for the RegentAfrica Times magazine and website, was gunned down by the Nigerian police while he was covering a protest by the Islamic Movement in Nigerian capital, Abuja, on 21 January.

3. A young Channels TV journalist, Precious Owolabi, was killed in similar circumstances on 22 July 2019. He was hit by a bullet while covering an Islamic Movement in Nigeria protest in Abuja & died later in hospital. According to the NUJ, no one has been arrested for his murder.

4. Pelumi Onifade, a 200-level student of the Dept. of History, Tai Solarin University of Edu., Ogun State, was an intern with GboahTV. He was killed by the officials of the Nigerian police attached to the Lagos State Task Force, on Saturday, October 24 2020. A 20-year-old kid

5. In 2017, ‘unknown’ gunmen shot and killed Ikechukwu Onubogu, working with the Anambra Broadcasting Service (ABS). He was a cameraman with ABS based in the state capital Awka. He was found dead, four days after he was reported missing by his family.

6. January 2020, Maxwell Nashan, a newscaster with government-owned Federal Radio Corporation (FRCN), was abducted from his home before being bound, gagged and hacked to death. He was preparing for his wedding in the days leading up to the attack

7. Edo Ugbagwu, 42, a court reporter with the Nation, was shot dead at his home in Lagos after men broke in and began arguing with him. According to Lawal Ogienagbon, a deputy editor at the Nation, Ugbagwu had not been working on any controversial stories.

8. On the same day Ugbagwu was murdered, Nathan Dabak, 36, & Sunday Gyang Bwede, 39, working for the Christian newspaper the Light Bearer, were stabbed to death while on their way to Jos.

9. September 2009, Bayo Ohu, 45, an assistant news editor for The Guardian, was shot by unidentified assailants as he answered a knock at the front door of his house in Lagos. The 6 assailants took a laptop & cell phone, according to the journalist’s relatives.

10. April 1999, Fidelis Ikwuebe, a freelance journalist who contributed to the Lagos daily The Guardian, was abducted and murdered while covering violent clashes between the Aguleri and Umuleri communities in Anambra State.

11. Okezie Amaruben, publisher of Newsservice magazine, was shot and killed by an Enugu State police officer. Amaruben was checking on a printing job being done for him in a shop when police officers verbally and physically attacked him. One placed a pistol to his forehead & hit him with the gun after he had identified himself as a journalist.People at the scene told the police officers that Amaruben was not the person they were looking for. He was being forced into a police vehicle when the officer fired his gun & the bullet pierced Amaruben’s skull

12. Sam Nimfa-Jan, a journalist with the magazine Details, based in Jos, was killed in Kafanchan, Kaduna State, during ethnic clashes. He was on assignment covering riots between the Hausa Fulani and Zangon-Kataf groups that broke out over the installation of a new emir.

13. Samson Boyi, a photojournalist with the Adamawa State­owned newspaper The Scope, was killed when about 30 armed men attacked the convoy of the state governor, who was traveling from the state capital, Yola, to the town of Bauchi.

14. Sunday Bwede, 39, journalist for the monthly newspaper of the Church of Christ, was driving to an assignment when he was attacked by a mob in Jos, Plateau state, according to the local chapter of the Nigerian Union of Journalists and news reports.

15. Tunde Oladepo, a senior correspondent with TheGuardian newspaper of Lagos, was murdered by 5masked gunmen, who entered his home early in the morning & shot him to death in front of his wife & children.Nothing was removed from Oladepo’s residence,ruling out robbery as a motive

16. Zakariya Isa, 41, a reporter and cameraman for the state-run NTA, in the northeastern state of Borno, was murdered by Boko Haram. The militants Islamist terrorist later claimed responsibility for Isa murder.

17. @DavidHundeyin investigative journalist at Bussinessday, majoring in politics, tech and finance, two weeks ago went into exile for fear of being arrested by what he described as: The return of abacha-ism and the assault on freedom In Nigeria.

18. Obi-Young said he was forced to leave Brittle Paper because of its “censorship” and lack of “freedom”. The controversies began after Obi-Young wrote an article that was critical of novelist and the wife of Kaduna State governor of Hadiza Isma El-Rufai.

19. In September 2018 in Abuja, Jones Abiri spoke about being tortured with a hot iron and the experience of not knowing when or if he would ever walk free. Abiri was the publisher of The Weekly Source in Yenagoa, when he was arrested in July 2016 by DSS on terrorism allegations

20. Samuel Ogundipe, a very popular brilliant journalist resigns from @PremiumTimesng many linked his resignation to a story he did about Bello El-Rufai. In the story, Bello El-Rufai, son of the Kaduna state governor, Nasir Ahmad el-Rufai, had threatened to gang-rape an old woman

Now pause for minute, and ask yourself…how many @CNN @CNNAfrica @cnnbrk journalists can withstand, survive or work round the clock under the harsh conditions Nigerian journalists work daily on extremely poor wages? How many prosecuted for killing these brilliant journalists?

21. 1. Brilliant Investigative Journalist, @fisayosoyombo  pretended he needed mental rehabilitation and went under cover for 3 weeks, including 10 straight days on ward admission, as a patient of the Federal Neuropsychiatric Hospital, Yaba.  Fisayo brilliant but dangerous investigation exposed the corruption and decrepit state of the country’s oldest psychiatric hospital, Yaba Nero-Psychiatric Hospital. If this investigation was executed by a foreign journalists, we wouldn’t stop talking about it on this platform.

22. Again, @fisayosoyombo  risks his life, went undercover to expose bribery, bail for sale & the recycling of criminals in a Lagos police station. He also exposed the corruption in Nigerian prisons & how justice is perverted. He spent 2 weeks in detention.

23. In the face of harassment & threats from the Nigerian govt. officials, @nicholasibekwe and @PremiumTimesng  still went ahead and investigated what actually transpired at the Lekki tollgate on the 20/10/2020. Brilliant piece of investigation. Respect!!