LIB reported earlier that CNN released its findings from an independent investigation carried out on the October 20 shooting incident at the Lekki tollgate.

Reacting to this in a tweet he shared, Adamu Garba who filed a lawsuit against Twitter CEO Jack Dorsey said he would have sued CNN if they instigated or sponsored people of Nigeria against its government. He also accused Jack of interfering directly in the protest.

I would have sued CNN if they instigated or sponsored people of Nigeria against its Govt. But one thing is clear. CNN is doing its job: Investigative & not “Conclusive” reporting. Unlike Jack who interfered directly While you enjoy the fleet, wait for response from authorities 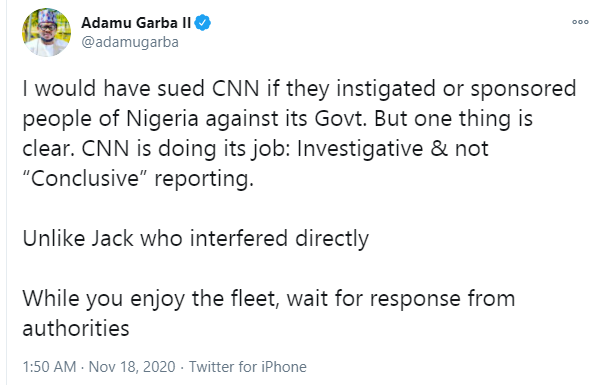